What is an Immersion Preschool? 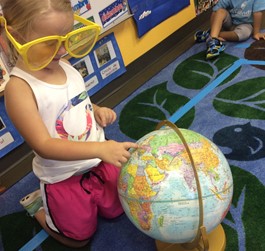 Language immersion, or simply immersion, is a method of teaching a second language in which the student’s second language is the medium of classroom instruction. Through this method, learners explore all the traditional academic centers (math, literacy, science, and social studies) in their second language. The main purpose of this method is to foster bilingualism, in other words, to develop learners’ communicative competence or language proficiency in their target language.

At Little Big Minds, we aim to leverage the rapid brain development that occurs between birth and 5 years old by providing children rich and dynamic learning opportunities and we do it all in Spanish!!

Compete in a Global Economy – Surprisingly, only 5% of the world population is a native English-speaker. Foreign language skills provide our future leaders the ability to communicate in a global economy.

Develop an Authentic Accent – Research shows that kids who learn a second language before the age of 7, develop more native-like pronunciation, speech patterns and intonation.

Build the Foundation for Reading Excellence – Children who acquire a second-language learn to continuously scaffold, connect and compare what they know with what they are learning. Skills learned in one language are easily transferred to the other language. Children are able to recognize symbolic relationships between letters and characters to become excelling readers in both languages.

Achieve Higher Test Scores – Standardized test results show that students who have focused on foreign language studies at an early age routinely achieve among the highest scores in all subjects tested (CAL, NABE, 2003).

Encourage Cultural Sensitivity – Not only does a second language provide young people the ability to communicate in another language but, at Little Big Minds Preschool, we focus on educating our students about world cultures. We believe that this holistic approach provides students with a unique understanding of other cultures and the confidence to engage in discussion about cultural differences. By trying different ethnic foods, playing games, dancing, listening to music and reading stories about other countries we encourage a sensitivity to other cultures.

Embrace Natural Learning – Unlike adult learners, children are able to absorb a language naturally. They learn through song, dance, interactive and experiential play. They mimic pronunciation fearlessly and build vocabulary effortlessly. It beats hours in the high school Spanish lab!

What are the benefits of bilingualism?

Research confirms that learning a second language before age five significantly alters the brain’s structure. According to the Society for Neuroscience, increased brain activity is so prominent and predictable that neurologists can identify bilingualism from a brain scan[1]. The cognitive benefits include reading proficiency, increased comprehension, greater flexibility in thinking, improved listening and problem-solving skills[2]. The belief that learning two languages might confuse or delay young learners has been consistently disproved. Rather, new studies show that learning two languages before the age of 5 gives children the ability to scaffold fundamental skills and apply them to both languages.

All skills and concepts learned in the second language, transfer to the native language.  In fact, research indicates that children who study a foreign language develop a better understanding and command of their native language in the long-run. The curriculum at Little Big Minds will exceed all standards for early childhood education as stipulated by the Arizona Early Childhood Learning Standards; our graduates will have mastered all the traditional preschool concepts, and in addition, they will have an excellent command of Spanish.

Learning Mandarin is becoming increasingly popular so, why Spanish?